Cosmoteer update 0.15.0 is now available for direct download and auto-update via Steam! This is a major update that adds crew squads, roles, and job priority customization. Here's how it works: 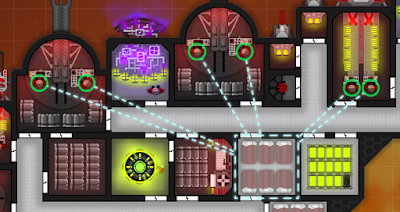 Your ship also has one or more "roles" for its crew. Each squad is assigned a role for the entire squad, which you can do in the crew U.I. in the "ROLES" tab by selecting the bunk/quarters and then clicking the button for the desired role. Each role can have a custom name, shirt color (which is also the color of their bedsheets!), and set of job priorities. You can create up to 20 roles per ship. 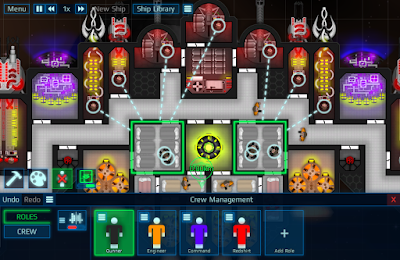 To customize the name, color, or job priorities for a role, click the little "hamburger" menu button in the corner of the big role button and select "Edit Role". This will open up a window allowing you to customize the role. To customize the role's job priorities, click on the "Job Priorities" tab, which will allow you to set the priority of each job for each ship part. Each job can be set to a priority between 1 and 10, where a higher priority number will take precedence over a lower priority number (i.e., crew will do a priority 10 job before doing a priority 1 job). You can also click the "no" sign to disable that job completely for that role, so crew with that role will never do that job. 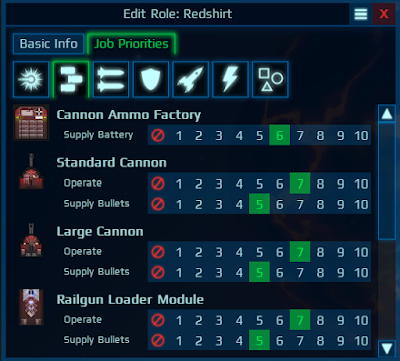 As a side-effect of switching to this new customizable priority system, the A.I. logic that controls the crew has actually been significantly simplified. Before, the A.I. would make complicated calculations to determine the priority of a given task, taking into consideration things like how much power/ammo a part already had. But that's all gone. Now, if a part needs 3 batteries, 3 "supply battery" jobs will be created, each with the same 1-10 priority (whatever priority you set that job to). Hopefully this change should make it easier to understand why your crew are doing the things that they are doing.

You can read about all the other improvements and fixes in this update in the changelog.