Cosmoteer update 0.15.4 is now available for direct download and auto-update via Steam! This update makes the crew a lot more visually diverse with a variety of skin colors, hair colors, and hair styles. It also adds community-created language translations for German, Russian, French, Spanish, Simplified Chinese, and Traditional Chinese. And lastly, it upgrades the underlying technology powering Cosmoteer, which should improve performance and make it possible for players with 32-bit and 64-bit operating systems to play multiplayer with each other.

For many years, the people who have inhabited Cosmoteer's ships have all looked like clones of the same light-skinned, short brown-haired, male-looking person. Honestly, as someone who believes in the value of diversity, I've been pretty embarrassed by how homogeneous Cosmoteer's crew are. Science fiction media like Star Trek and Star Wars, which Cosmoteer is obviously very inspired by, have long portrayed a more diverse future as an ideal that we should strive for. Cosmoteer has for a very long time failed to live up to that ideal.

I hope that this latest update is a significant step towards living up to that ideal of a more diverse future. While still nameless and with identical abilities, the people that crew Cosmoteer's ships now appear more visually diverse with a variety of skin tones, hair colors, and hair styles. And while Cosmoteer does not have any explicit notion of "gender" coded into the game, some of the hair styles evoke traditional male or female sensibilities, at least by our early 21st century standards. (But who's to really say how fashion will have changed hundreds of years from now.) 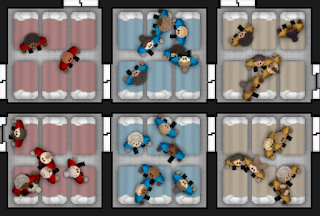 This is the first update to include translations created by Cosmoteer players as part of the Cosmoteer Translation Project. This is a community-driven effort to translate Cosmoteer from English into as many languages as possible. Initially with this update, Cosmoteer can now be played in German, Russian, French, Spanish, and both simplified and traditional Chinese. These translations are very much a work-in-progress and may contain errors and omissions. If you want to help translate Cosmoteer into your language, head over to the Cosmoteer Translation Project to read more about it. 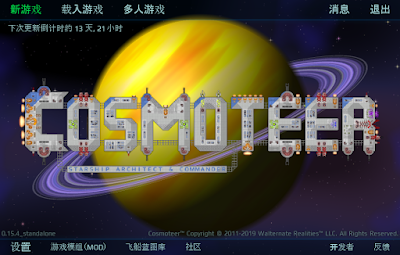 Cosmoteer is coded in C#, a programming language created by Microsoft. C# itself runs on top of a technology platform they also created called the ".NET Framework". Although it still works great and has been updated many times over the years, the .NET Framework is fundamentally a pretty old technology, having been around since 2001. Over the past few years, Microsoft has been working on a successor to .NET Framework called ".NET Core", a more modern and much improved technology. Earlier this year, Microsoft announced that further development of .NET Framework was being stopped in favor of concentrating on .NET Core. And just a few weeks ago .NET Core 3.0 was released and included all the features needed for Cosmoteer, which finally allowed me to switch to it from .NET Framework.

There were a lot of advantages to switching to .NET Core:

The only major disadvantage to .NET Core is that now Cosmoteer's download and installation size is much larger, because it no longer installs the .NET Framework separately and has to include everything it needs to run within the application itself. The new installer is about 200 MB, more than twice as big as the old installer.

This update also has a handful of other fixes and improvements, which you can read about in the changelog.